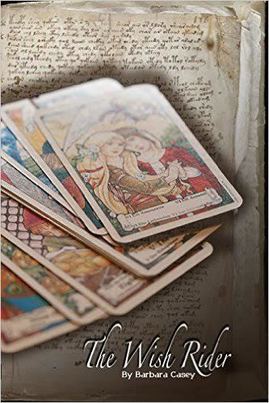 The Wish Rider: Book 2 of the F.I.G. Mysteries

Seventeen-year-old Dara Roux and her two best friends, Mackenzie Yarborough and Jennifer Torres, the three collectively referred to as the F.I.G.’s (Females of Intellectual Genius) because each has an intelligence quotient in the genius range, have just returned from Frascati, Italy. It was there that their much loved teacher and mentor, Carolina Lovel, discovered that her birth parents were gypsies, and that she had a connection to the Voynich Manuscript, the most mysterious document in the world.

Now, with graduation from Wood Rose Orphanage and Academy for Young Women behind them, Dara asks her friends to help her locate her birth mother when she learns that she might be living in New York City. Relying on Dara’s gift for speaking and understanding foreign languages, the black and white images that stir musical cadences in Jennifer’s mind, and Mackenzie’s mathematical calculations that normally provide numerical solutions and answers to life’s most difficult questions, the determined young women tirelessly go from one address to another in search of Dara’s mother.

Their determination turns to desperation, however, as they encounter a dark hidden society more dangerous and terrifying than they could have imagined. It is there that

Dara hopes to find out why she was abandoned in a candy store all those years ago.

Barbara Casey is the author of several award-winning novels for both adults and young adults, as well as book-length works of nonfiction true crime and numerous articles, poems, and short stories. Her nonfiction true crime book, Kathryn Kelly: The Moll Behind Machine Gun Kelly, has been optioned for a major film and television series. In addition to her own writing, she is an editorial consultant and president of the Barbara Casey Agency. Established in 1995, she represents authors throughout the United States, Great Britain, Canada, and Japan. Barbara is also a partner in Strategic Media Books Publishing, an independent publishing house that specializes in cutting-edge adult nonfiction. Barbara lives on a mountain in Georgia with her husband, and three dogs who adopted her: Benton, a hound-mix; Fitz, a miniature dachshund; and Gert, a Jack Russel terrier of sorts.Connect with the author: Website

My Review
The Wish Rider (Book 2 of The F.I.G. Mysteries) by Barbara Casey was a well written sequel to the first book in the series. In this book the author moved away from Carolina Lovel and instead focused more on Dara Roux, Mackenzie Yarborough, and Jennifer Torres also known as the F.I.G.’s (Females of Intellectual Genius). I found the story of Dara being abandoned in a Candy store interesting as it made me want to know and understand why she was left there instead of at a hospital or fire station. I found that I enjoyed this book more than the first one in the series.